Who Else Wants To Easily Earn $2000-$9,500 Commission Checks Every Single Week Like Clockwork?

My simple Funnel Closer system will work for you, if you are at the bottom of your company or at the top or even if you’re alone-wolf who’s “self-employed”

My name is Ryan Stewman, I’m the founder of Hardcore Closer.

We sell money-making and lead generation strategies that work. And I’d like to give the most powerful of them to you now.

How much money could you earn every month, if you were able to make a minimum of $2000.00 commission for every sale you made… without leaving your kitchen table?

Heck, some folks would be happy closing just one person a month… but if you’re anything like me, you want to close as much as possible.

Now, before we get into this, you need to take any “Inside the box” thinking and sit it next to you.

You need to take your ego, and pull it out of you. You need to pay close attention to what I’m about to reveal to you because this could be the one thing that you’ve been waiting for your entire sales career.

I believe that this is the most monumental discovery of my entire entrepreneurial journey, and I’m going to share it with you, right now.

We’ve been working on this project for a long time now.

As a matter of fact, as of writing this, it’s been seven years of training, learning, doing, implementing, tracking, failures, lessons learned and everything in between all to bring you this training right now.

Listen, the premise of this is about being a funnel closer.

Even if you’re not familiar with the term “funnel,” I’m going to explain all of that to you in this training and I’m going to talk about how you, the sales professional, can tap into a wide open market where you’re able to make money hand over fist.

You’re here for a real reason.

Something led you to this website and made you read these words.

Maybe you’re unhappy with your current job, maybe you need to make more money because your spouse is telling you that you need to get your stuff together…

Maybe you’re behind on the rent. Maybe you just need a way to actually make money because you’re unemployed.

Listen, you’re here because you want to earn more cash for a real reason.

Be aware and conscious of that – it’ll “wire” you for the training you’re about to discover as you scroll down this page, reading each line, word for word.

In 2008, I left federal prison for gun charges.

I left with $25 (given to me by the prison) to my name and the store across the street from the prison cost me $5 to cash that check, so I left with truthfully, only $20.

After getting out in 2008, I had a wonderful job, got married and then, ended up getting a divorce.

You know what they say, 64% of all marriages end in divorce and the thing is, it’s a tough thing to go through.

Listen, if you’re on this page because you’re facing divorce or breakup, you need to get your money right for your kids and family… and yourself.

When the pressure is on as a closer, we don’t fold.

Pressure makes diamonds, their ain’t nothing wrong with it.

I’ve been through divorce.

I’ve been addicted to drugs.

I didn’t finish school… I’ve been to prison and through it all, I’m still here.

And so are you…

A funnel is a systematic way of taking you cold prospect and converting them into a hot lead or customer.

If you go to Zillow to look up a property, it asks you for your name, email address and phone number to view a home,that’s a funnel.

If you go to a news site and there’s a pop up and it says, “Get our free report on your neighborhood, just give us yourname, your email address, and phone number and tell us where to send it,” that’s a funnel as well, but a lot of people don’t realize that.

They just think it’s a website asking for your name, email address and phone number.

Once it asked for your name, email address and phone number, the logical thing to do would be to sell you something.

You see, when I lost my job in 2010 I went from broke and desperate, to making millions only a few short years later in 2017.

When I lost my job in 2010, I called one of the most respected people that I know.

A guy named, Michael Reese who was a real estate agent.

He spilled the beans as to why he left the real estate business to do something called internet marketing.

Pressure makes diamonds, their ain’t nothing wrong with it.

Back then, I had no clue what internet marketing was… like zero.

It was $8,000 because there was a lot of things that were going into this, but I followed the blueprint step by step, and I made a funnel for an energy drink.

After having this sales funnel for this energy drink, I grabbed an affiliate link for an energy drink from their company website and after a few days I randomly sold one on the internet, so I knew it was possible.

Then, I went back and I created another program for loan officers and I sold a whole bunch of them, to the tune of $30,000 within 60 days of learning this technology.

When you flash forward now, you don’t have to learn how to program, use WordPress, put blogs up on the servers or any stuff like that.

There’s so much more to this and I’m going to share it here on this page.

It was nothing more than DVDs with information.

I could have watched them and knocked them, “Eh, they’re not going to work.”

I could have watched them and went, “That’s interesting, but I’m not interested.”

Instead, I said, “You know what? If Mike invested his $8,000 into this, there’s got to be something here.

When I watched that, I said, “You know what? The least I can do is see if it works because what if it does?”

Both of them do multiple seven figures per year. 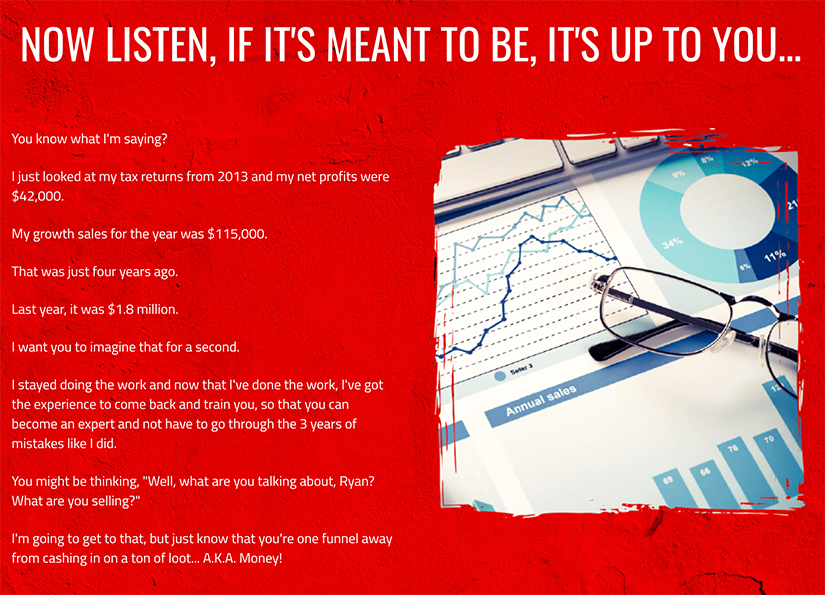 Do you remember that quote from Tommy Boy?

Tommy Boy is the greatest sales movie of all time, because it’s about a guy who was a goofball, who became a leader because his father died.

He doesn’t hire, he aligns himself with a mentor, Richard and they go around the country trying to make sales to save the company.

And he consistently makes the same mistakes until he gets his pitch down.

Then, he goes in and he closes the big dog… saves the city, gets the girl, goes back and becomes the big dog in his job.

That’s the coolest sales movie and story of all time.

When you think of sales, you don’t think of Tommy Boy really.

Back to the story, the funnel makers, they don’t know how to make sales.

They don’t like talking to people. They’d rather design things than get on the phone and communicate.

It’s a BIG problem for them.

Our other big problem is that sales people don’t know how to make funnels.

You’re probably going, “Okay. I understand what he’s talking about with the funnel, but how the hell does one of those appear? I go out, I sell funnels and then what? I’ve got to make it? Oh, heck no. I don’t know how to make it.”

Listen, I don’t want you to learn how to make it either.

I’m just showing you that an industry exists with two big problems. The people that make and design the sites can’t sell their way out of a paper bag, and the people that are boss sales people, can’t design a site if their life depended on it.

Well, I know as a sales person, that our #1 job is to find a need and fill it, find a problem and create a solution.

The best part is…

You can fill the need for sales funnels in a booming marketplace with just your sales skills, and you don’t even have to know how to fulfill the product.

You could be running a funnel for a local dry cleaner and they might do .99 cent shirts this month, and next month, it might be $2 pants or $3 dry cleaning.

You might have a dentist that this month has their offer as free teeth whitening, next week it’s free teeth xrays.

Offers change often, and every time they change the offer, they need to make sure that their funnel reflects that.

See, as a customer, the only way you would know that the business has some kind of offer or some kind of special going on is if you actually contacted the office.

Websites require HTML coding. They require JavaScript, they require being uploaded to servers and all these other complicated things. Funnels don’t require any of that.

Plus, they’re faster and more profitable.

See, business owners don’t know this, but these sales funnels are the new websites and you get to be just like the folks that were selling websites in the ’90s that made billions.

I’m sure somebody is up there doing it.

GoDaddy sold a lot of websites and probably made billions of dollars. There’s unlimited prospects out there. You’ve got to understand that.
Number three, we’ve done the hard work for you.

We figured it out. We got the roadmap.

We have a workforce database, which means we’ve got all the funnel makers in one spot.

Not all of them, but enough to where we’re going to have you totally covered.

Just go out and make a sale, enter it into our database and one of our funnel makers will pick up the project and make it for you.

All you’ve got to do is pay them half upfront and half on delivery.

They do all the consulting and they never discuss money with your people.

Then, they go over everything and make the funnel.